Nitra Castle and the Castle Ground

The Castle of Nitra is considered to be one of the most significant features of Nitra. It was built on a limestone rock, which is surrounded by the meander of the Nitra River from three sides. The Castle of Nitra is a cultural heritage and together with the Upper Town on the southern slope of the castle hill was proclaimed a Town Conservation Reserve. The Castle of Nitra consists of four independent parts: the cathedral, bishop palace, outbuildings and outer walls with one entrance gate. (Source: nisys.sk) 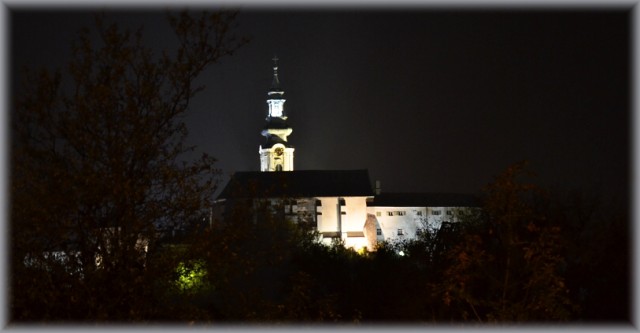 Urban district Zobor is located in an attractive location. Sun-drenched southern slopes of the eponymous hill were previously covered with vineyards. There are many fancy villas heavily built at this place now. The villas offer the most beautiful and luxurious living in Nitra.

Its front top The Pyramid (553 meters) gives a panoramic view of Nitra and wide surroundings. Next to the telecommunication tower is a pedestal standing. There is a millennium monument on it. The monument was unveiled August 30th, 1896 in honor of the celebration of the foundation of Hungary.

Behind slight saddle is the main hill Zobor (588 meters), which provides a limited view of the east side. In the woods around the peak can still be distinguished the remains of stone ramparts defining prehistoric settlement from the Bronze Age. On this spot was staying one of the defensive settlements scattered around Nitra in the period of Great Moravia.

In the middle of the vineyard residues stands The St. Urban´s Church from 18th century. Its current appearance implemented in 1939 after many adjustments. Valuable sacral monument of the church, whose patron is the traditional protector of winegrowers, is a fragment of stone sculptures of Sorrows from 1746. During the construction of the amphitheater at the bottom of the Zobor was a large necropolis from the period just after the demise of Great Moravia found. However, only 165 of 700 graves have been managed to be documented. (Source: nisys.sk)

Picturesque St. Michael´s Archangel Church welcomes pilgrims from the distance. This dominant standing on the sharp point of Tríbeč is visible from Nitra planes to a part of Považie. Silent witness of an old times is Romanesque building from the half of the 11th century. Local nobleman Dražej owned the church in the oldest period. Name of the village is derived from his typically Slavic name. The village later belonged under the Nitra bishop, it is mentioned in Zobor List of 1111 as a Drasei.

Spot where the church is standing is an important archeological habitat. There was Slavic settlement and a graveyard discovered. Although the church has passed through many reconstruction, it keeps its original medieval magic. Nave building with a semicircular apse is characterized as Romanesque chapel. The ship has a flat ceiling and on the west side is the bunk Emporia. Facades are plain, in the middle of the frontage is a tower ending in masonry pyramidal roof. One of the best preserved Romanesque monuments in Slovakia is dedicated to St. Michael Archangel. For Christians, he is a symbol of the fight with evil and danger.

The construction and location of the church have always evoked interest and honor. There are many legends about this beautiful place being told among locals. It is said that Virgin Mary have appeared in front of the altar several times. Her appearance made people to reconstruct the small temple. The legend also says that residents of Dražovce mined the stone from the hill that was bleeding, because human caginess undermined the place chosen by the heavens. The church was built by king Stephen on the spot, which he called as created by God.

There is liturgy being celebrated in the church more often recently. Everybody is enchanted not only by a strange atmosphere of a simple construction dominating also in sanctuary, but also by such a beautiful far view.

This idyllic Romanesque art of pure lines has become a popular symbol of Slovakia even for its banknotes. Nowadays it is also printed on the two euro post stamps being delivered to mailboxes all over the world. (Source: pokladyslovenska.sk)

The very first theatre in Nitra was built in 1883 with a capacity of 360 seats. The nine meters wide stage was lighted by kerosene lamps. Nitra had about 9000 citizens then.

The building was standing on the place where the theatre is now and served public until its destruction by air bomb in World War II. However, this didn´t stop the attempt to restore a professional theatre scene in the city. It was created in the National House building and at the gym TJ Sokol at the same time. This space modified for the theatrical purpose was used for 43 years since December 1949.

In 1992 Andrej Bagar´s theatre moved to its old building and since then is taking its place in one of the biggest and most modern theatrical buildings in Slovakia. Two playing rooms – Big Hall with the capacity of 577 seats and Studio with 120 – 150 seats with variable arrangement – are a prerequisite for uninterrupted service of multipurpose theater booth, creating ideal conditions for the creation, presentation and perception of the modern stage arts.

The direct predecessor of the Nitra Museum, the Nitra National Museum, was established in December 1962, and placed in the former Major Seminary. The museum in Nitra never had its own building, and this fact had a very unfavorable impact on its overall functioning, and caused its frequent malfunction, too. It was only in the mid-seventies that it started to fulfill all its tasks, when it received its rightful human and technical resources. The museum staff, besides their own museological work, also pursued activities which were untraditional for those times. The aim was to find and keep their visitors, and to become widely known in visitors' circles. The museum collaborated with schools, study circles, informal groups and individuals, it created a platform for the presentation of noteworthy activities, which could not find a place elsewhere or which were predetermined for it by the historical field of the Major Seminary. The most well-known of these included the Theatre Below the Castle, the Gallery of Children's Artistic Works, the activities of the Nitra Quartet, chamber concerts, the Cithara Aediculae festival, as well as lecture series.

By time, the most complex archaeological exhibition in Slovakia became much frequented and popular of its time. It was used by teachers for their classes, not only by ones from Nitra and its vicinity, but from the whole of western Slovakia. The open days with samples of museological work and folk crafts became very popular. Through these activities, the Nitra Museum became one of the pioneers of modern museums. In 1990, the museum moved to the building of the former town house, the town hall in Štefánikova trieda. Today, the Nitra Museum as an institution of homeland studies type, conducts its collecting activities in the field of botanic, zoology, archeology, history, ethnography and numismatics. 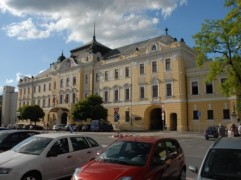 Since its establishment in 1965, the Nitra Gallery experienced many changes, but one thing remained the same. Its mission to bring fine arts closer to the people, first of all the people of Nitra and its vicinity still persists. The gallery resides in the Region House, and provides access to fine arts for its visitors from various perspectives. Its exhibition halls include the Salon, the Representative Halls, the Youth's Gallery and the Bunker, which is a space for young alternative arts. According to its latest offer, besides pictures we can see exhibitions of sculpture, graphics, photography, students' films, and a novelty are the interactive exhibitions. Besides projects and activities related to fine arts, the Nitra Gallery opens its halls for other, non-artistic media as well. Such are, for example, the gabfests with contemporary Slovak writers, artists, the chamber concerts of classical music, various educational events, workshops and seminars for school teachers, etc.

The Nitra Gallery is a collection creating gallery, which means that in its archives, it stores a large number of artistic treasures by several, mostly Slovak, authors. They are mainly collections of paintings, drawings, graphics, but also of sculptures, reliefs and objects. It houses artworks of the sculptors Július Bártfay and his son, Tibor Bártfay, graphics and illustrations by Koloman Sokol, Ľudovít Fulla and Albín Brunovský, whose illustrations are known from the collection of fairy tales by Pavol Dobšinský. The collection stock includes more than 4,000 works, and represents mostly twentieth-century art. These collections, found in the depositories of the gallery, are not dull valuables only. From time to time, they are exhibited to stand witness to their time, author, our life, our town. 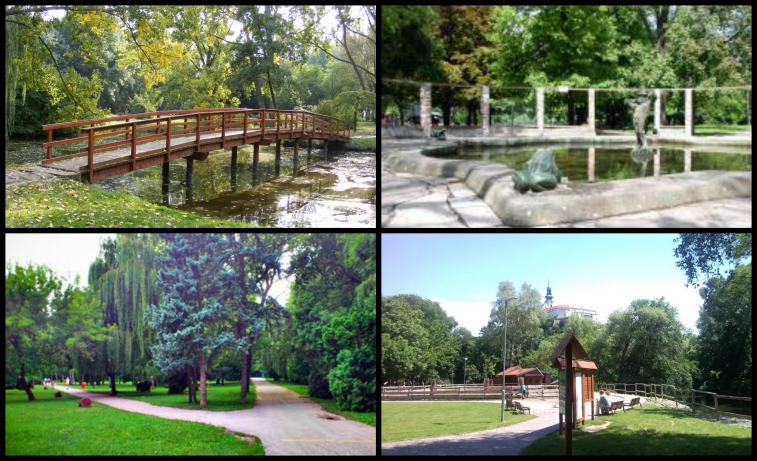 The Nitra City Park appears as a green oasis in the middle of the busy town. Mainly in summer, it is a popular place for resting and entertainment for the inhabitants as well as visitors of the town. The area of the park is 20 ha, and it includes three parts from various periods. The oldest part of the park, Sihoť, rich in attractions, is meant mainly for children. There is a popular beer parlour here - the cafeteria On Sihoť, and a unique playground, which provides entertainment even for adults at the parlour games of mill and Russian skittles. The hurdle cableway, right behind the playground, and the labyrinth, situated in the place of a former artificial pond, are meant for bigger children. From the historical elements, the most well-known is the Frog Fountain by the sculptor Július Bártfay from 1935 with the water sprite Žblnko in the middle. The building of the former excursion pub at the end of the promenade with linden alleys reminds us of the rich history of the park. It was built in a classicist style in 1831 by Bishop Joseph Wurum. In front of it, in an open space, there was a gazebo, a place for traditional folk parties and celebrations. Today, during summer weekends, the gazebo provides a rich cultural program for all the visitors of the park. Near the gazebo, a farmer's courtyard, with domestic animals, is built. With wooden sculptures and its overall concept, it evokes the traditional life in a farm courtyard in the area of Nitra. Children can stroke a calf, a donkey, sheep, goats, and watch pigs and peacocks in their runs. A year-round attraction of the park is the enclosure with a pack of fallow deer and mouflons, mainly at the time of their offspring's birth in the beginning of summer. An indispensable part of the park is the summer swimming pool.

This park is just 300 meters from our guest-house through the bridge.